Sony releases SmartEyeglass Developer Edition (SED-E1) for $840 to promote the development of a wide range of apps by offering Software Developer Kit. Sony Corporation has developed the "SmartEyeglass" transparent lens eyewear that connects with compatible smartphones (Android 4.4 or higher) to superimpose information such as text, symbols, and images onto the user's field of view, and it is moving forward with preparations towards the commercialization of the product.
In order to explore the possibilities with and facilitate the development of apps for the device, Sony announces that it will offer the SED-E1 "SmartEyeglass Developer Edition" for sale in Japan, the United States (US), the United Kingdom (UK), and Germany from March 10th.
In the UK and Germany, the device is now available for pre-order. It will also be offered for sale to enterprise customers in France, Italy, Spain, Belgium, the Netherlands and Sweden from March 10th in order to promote the development of apps geared toward industrial use. The SmartEyeglass Developer Edition will be sold through the dedicated SmartEyeglass page of "Sony Developer World," an application development support website for Sony products. 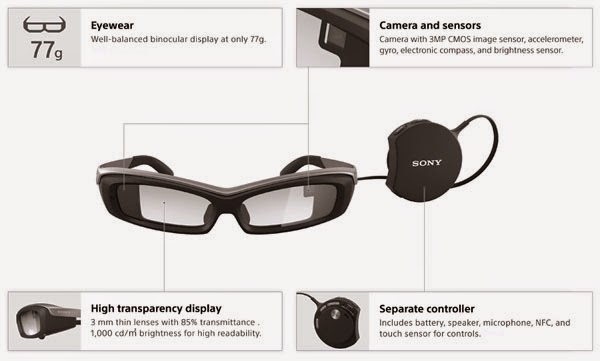 In addition to the hardware, Sony will also begin providing the official release of the Software Development Kit (SDK) for the SmartEyeglass, an upgraded version of the Developer Preview SDK that it has made available since last September. Through this official release, it is looking to promote the development of even more apps compatible with the device. Sony also has its eyes set on the future of wearable devices and their diversifying use cases, and it hopes to tap into the ingenuity of developers to improve upon the user experience that the SmartEyeglass provides.
Going forward, Sony will accelerate its efforts to promote the development of apps for SmartEyeglass, as it eyes the commercialization of the product for both consumers and enterprise customers in 2016.
Price:
100,000 yen + tax (Japan)
$840 + tax (US)
520 pounds + tax (UK)
€670 + tax (all other applicable countries)